This is the third in a series of posts that explore the “little things” that lead to big improvements in agility AND your relationship with your dog.

A young puppy is a learning machine. And one of the biggest lessons it will learn from you is HOW to learn. We want the puppy to learn that good CHOICES earn reinforcement, whether it is being reinforced for checking in with you when taking a mini-walk in the back yard, or for a specific behavior like a sit or a down. Teaching trick behaviors is a great way to approach this because it encourages the puppy to try and rewards the “good” choices the puppy makes. It lays the groundwork for future work by building confidence in the puppy that it can elicit reinforcement through its choices. And the trainer is more relaxed because there are just fun games to play with the puppy.

Marking the good choices is the key to communicating with the puppy. Whether you use a clicker, a consistent verbal marker like “Yes!” or “Yip!”, or simply get reinforcement into the dog quickly, it’s capturing the moment of the good CHOICE that makes the difference. The puppy learns quickly that the mark is followed by a reward.

My Sheltie Lacey was easy to teach tricks because I conditioned her from 8 or 9 weeks old to understand that an audible marker (click or “yes!) meant “that’s a good choice!” (and would get a cookie). She was a very active and quick dog that offered a lot of behaviors that I could capture like rolling over and leaping in the air or rotating on a perch. Once she was rewarded for the behavior she offered it again and that led to being able to put these trick behaviors on “cue”.

But Lacey was also quite independent and confident. To put it bluntly, she didn’t need me that much at first. If nothing else was going on, she was happy to do anything I asked but if we were outside or other dogs were around, I more or less disappeared from her consciousness. Teaching Lacey a reliable recall was a long-term project. And for a while, she mastered the Sheltie “you can’t catch me” game, so early mornings she was on a long-line even in the fenced back yard. This was to ensure that I could get to work on time!

Lacey taught me a lot. I had to figure out how to increase my value to her and change her mindset to make the choice to be with me. I eventually realized that the key to building that value was not to strictly limit her freedom but to let her know she could have that freedom even after she checked in with me. Checking in meant a cookie and praise because that was what she found valuable. Toy play wasn’t a good choice for Lacey (but was a good choice for my border collie Nick). So, we did lots 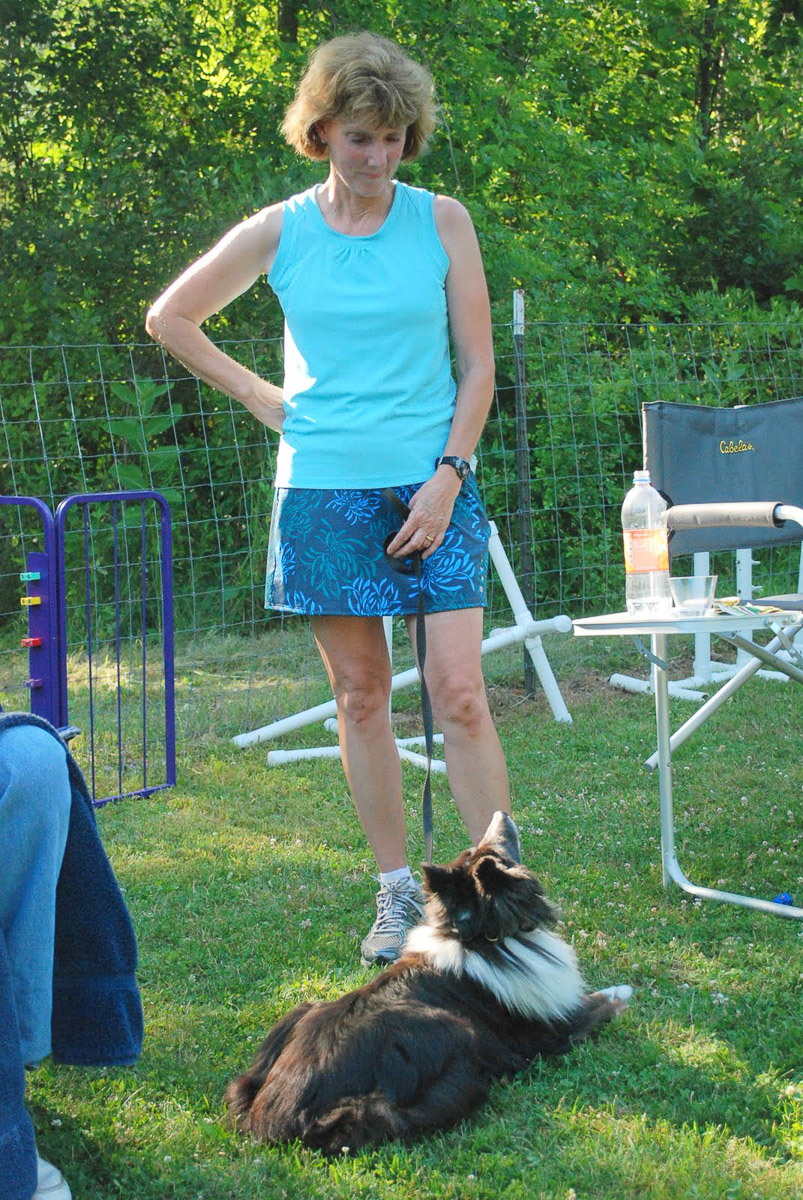 of off-leash walks in safe places (sometimes with a long line) letting her choose to check in with me, get her reward and still have her freedom. During nice weather, I left the back door open to our fenced yard and went about my business in the house, letting her come find me, get a cookie and praise and then she could choose to go back out again.

I could relate many Lacey stories but the key point I want to get across is the importance of rewarding the puppy’s good choices and how that can shape the behaviors you want while instilling confidence in the puppy and improving your relationship. The earlier you establish that the puppy’s choices get rewarded, the easier it is to set up your puppy for success and to mark and reward the behaviors you want to be repeated. It lays the groundwork for all of your future training.

Now, back to how setting the dog up for the right choice can help teach behaviors. Four paws in a box is an example of a simple trick that many people teach their puppies. The key is to setup the environment to allow the puppy to be successful with very little effort. So using a box bigger than the puppy with low sides increases the probability that the puppy will step inside the box on its own* and that “choice” can be marked and rewarded. From there, the trainer can use smaller boxes to challenge the puppy to work a little harder for its reward and increase the pup’s understanding of the desired behavior. *I would not be above throwing a cookie in the box one or two times to encourage interaction.

Here is another example: A “trick” I taught Nick as a winter project was hitting a target with four paws. This is a foundation behavior for teaching running contacts that I learned from Justine Davenport of Shape Up! Dog Training. The early stages provide a good example of setting up the environment for success. In this session, I was teaching Nick to go back and forth from bowl to bowl while going around an object. At first the object was so close to me that he had little choice but to go around it. I incrementally moved the object farther away from me and added a second object so that he now had a choice to go between me and the objects and was only rewarded when he made the correct choice. You can see how smoothly this session went and how quickly he progressed. No luring, no corrections. Just setting him up to be “right” while still leaving the door open to be “wrong”. That is how learning happens!

It’s up to us as trainers to give our dogs every opportunity to make good choices while they are learning new behaviors. Controlling the environment and limiting the puppy’s options to increase the probability of good choices is the key to success. While this is one of the “little things” that I included in this article series, it is actually a really BIG thing for your dog’s training success.  Happy Training!